Let Our Customers Speak For Us

Urban Bikes Direct takes pride in our e-bike reviews and strive to meet every customers needs. We take pride in having the best e-bike reviews in the industry. Family owned and operated, it is our mission to create a more efficient world by providing the best e-bikes on the market through our trusted suppliers. We take pride in our fast 3-5 day delivery while including no sales tax and free shipping.

We can only speak so much, so take a look below to see what our customers have to say. Check Out Our Electric Bike Reviews

Bought the ebike in January. Surprisingly, the 16" wheels were perfect for stability in the snow and ice. What a way to get started. Now it's Spring and all the paths are clear. Rides to the bank, to the stores and now 15 miles cross-town to work. What a delight. Simple, strong, effortless. Like with the X5. Happy Day.

Very happy with my fenders & luggage rack. But you sent me a double order, 4 fenders & 2 racks. Do not know where to return extra set. Send me a return label so I can return the extra order. Thank you. Very happy with your product.

Thank you for the battery and the good customer service..

I like everything about the bike. I totally enjoy the ride. Since it’s a refurbished bike, I would appreciate having a small jar of white paint for the touch-ups.

This is amazing. I love it and my son loves it even more. He can’t get enough of it.

First off, the Green Bike Big Dog Off Road is a great bike that I really like and would buy again. My reasons for picking this bike had to do with the price, high end features, and support from the manufacturer.

It’s easy to buy a bike from a local shop that will give you face to face support. Buying on-line is riskier. I did some research and found only one complaint for Green Bike on the Better Business Bureau (BBB) web site. The customer was complaining about bike failures while he was traveling around his apple orchard. Even though that could be thought of as a “commercial” use, Green Bike offered replacement or a full refund. That’s a company that stands behind its product. When I had some minor issues and called, they offered to pay if I needed to take it to a local bike shop. They also stock the parts and will quick ship them to you as needed. When I had a battery failure they sent a label to ship it back to them and returned it fixed within 2 weeks. I hated not being able to ride, but it’s good to know they will take care of it.

The high end features I like include a 750 motor carries my 230 lbs to 22 mph on flat ground. I only have to peddle on very steep hills. But don’t expect to be spinning the rear tire like you see in their ad. I’m a Harley guy and know something about torque. This is just a bicycle. The battery is the biggest in the business. So far my butt gives out long before the battery. Also the mag wheels, hydraulic brakes, front/rear lights, gel seat, and fenders are things you would pay extra for on most bikes.

Onr thing that’s not mentioned in the description is the handlebars don’t fold. I looked all over for a picture of it folded and couldn’t find one. All the pictures were for the “Extreme” and that one does have folding handlebars. Also mentioned in another review was that the seat can’t be adjusted very low. The height works for me at 5’9” but wouldn’t work for my wife. I know “real” bikers adjust the seat so their legs are nearly straight when peddling. I don’t feel comfortable that high. That also means peddling isn’t very comfortable, and I’m okay with that. I like cruising bike trails using only battery power.

I was getting a lot of error “0009” codes on the bike computer screen. I thought there was something wrong with it until I discovered it was my own fault. I would accidentally jerk the throttle on and off over large bumps. The seat is better than most, but my butt is bigger than most, so I ordered a bigger bike seat, padded better for seniors. It helps but I still like to take a stretch break every hour or less. But I did that on my Harley too, so maybe it’s just me.

This is a pretty good electric bike for the price. And now after 2 Minnesota summers, I still like it, and would buy it again. Enough said.

Giving it to my grandson for his birthday which is the end of January, so haven't used yet. I know he will live it. Dealing with Urban Bike has been so easy.

This bike makes my wife very happy. We bought it to be portable and functional but it get more use for fun. We have not pushed the limits of the battery, longer rides have been in the 10 to 14 mile range, but there is plenty of reserve charge left at that point. The bike is a bit small form me at 6' 2" but still fun.

W
Nakto City Cargo Pony Electric City Bike Wow what a fun time I am having with my new ebike!
Nakto Pony

I’m 5’2” age 67, this ebike is perfect! Had to get familiar with it slowly as it didn’t come with instructions, plus I could not test it anywhere! I love this fast, fun, cute 20 inch high ebike! I can easily stop and put my foot on the ground while still setting on the seat! PERFECT! 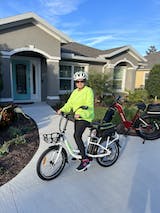 Customer Service was slow/non-responsive with my queries when Jupiter e-bike would ship, but eventually replied and I finally received it. Perhaps COVID-19 shipping delays? Completely happy with my Jupiter Discovery X5 e-bike in Star Wars color white/black.

So far so good would recommend

This is my second board I've owned and the difference between my older board and this one is amazing! It has higher topspeed, better hill climbing ability, better acceleration, and stronger braking. It handles my stone driveway well except the soft sand sections where it gets stuck. They put rumble strips in the middle on one of my old favorite roads to ride on which really got on my nerves but now I can ride right over them! The range could be better. I probably should have spent the extra money on a better battery but oh well. I highly recommended this board!

Just get it, you won't regret it. It will require maintenance, but totally worth it for the fun!

This bike is amazing. The throttle is great to use when you're in need of some pick up so smooth and powerful. And the assisted pedal levels are insane! I never go above 2 for the pedal assist. Even though this bike is a lower-priced e-bike, Don't let that stop you, I am so amazed by this bike so smooth.

so glad i ordered my scooter It is better than i expected!

My first 1 got stolen in the first week so didn’t really put it to the test to give a proper review but just bought another so ask me in a month.so far I really like it.but only put 5 miles so far.

I had a few small issues when I initially received the bike, but dealing with customer service was a breeze. They answered me promptly, and handled my issues expediently!! The bike itself is AMAZING!! No complaints, besides one: the seat isn't super comfy, BUT it is an easy fix with a seat cover !!! I cannot wait for warmer weather so I can get back outside !!!

Added to your cart: